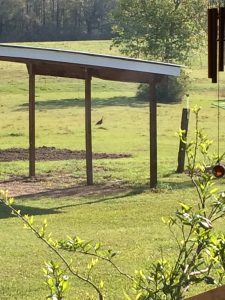 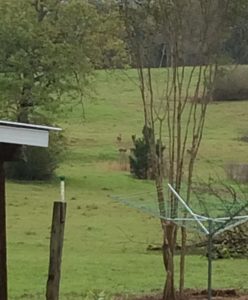 Well we knew the property had wildlife.  We had heard stories of hunting deer and turkey. We see squirrels all over. The birds are incredible: cardinals, robins, blue jays are among the most colorful. 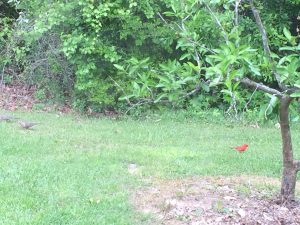 While our actual sightings to date of the bigger game are somewhat rare (maybe something to do with a couple of active dogs), some of them have been spectacular.

We had seen deer in the pasture, but April got an eyeful when Marble’s growling (in bed with her) woke her up and she looked out the picture window to see an deer walk through the back yard!! She was awake enough to let us know it didn’t have antlers and as such was a girl deer.

At the end of the second turkey season, we started to hear turkey calls in the woods across the pond. We saw one in the pasture, then a few days later as Randy, Mom and I were sitting on the porch, a huge one came swooping through the yard just ten feet off Randy’s right shoulder. So cool…

Not so cool were some coyotes we saw walk through the pasture near the house.  They are considered outlaw quadrupeds here and we can’t wait until we can get our hunting licenses and be able to take them. 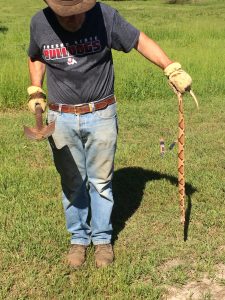 Also not so cool-being surprised by a copperhead crawling out of my garden from where I was sitting a few minutes before. Two days later I surprised one of them while mowing.  I am seriously considering armed gardening!

We are looking forward to seeing more wildlife now that all of the hunting seasons have closed for the year.

One of the more curious sightings occurred on Hwy 62 about 3 miles from the house.  My brother and I were driving and came across a peacock crossing the road!! It brought to mind driving Soledad Canyon road and seeing elephants in the wash.  Turns out there are at least 4 in that area. Two blue, one green and one white.  We have seen them on various trips to town but don’t know the story behind them.  Just fascinating and glad they are 3 miles away! 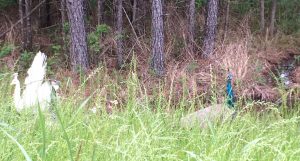