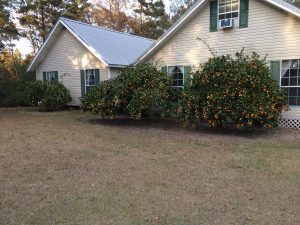 When we were looking at the house, originally we noticed the beautiful citrus trees. The owner told us they were Satsumas and joked (sort of) that a condition of the sale was that they would be allowed to come back and pick some satsumas when they were ripe.

When we started visiting after the sale was complete, we noticed that the trees had A LOT of green fruit on them and the neighbors started commenting on the wonderful Satsumas.

Fast forward to the actual move-in in October and the realization that we were the proud owners of not one or two, but TEN Satsuma trees.  And, boy was it a good year for this amazing fruit.  They are sort of like cuties, but come in small, large and everything in between.

We eat them with breakfast, lunch, dinner and for snacks-no vitamin C deficiency here.  No one can visit without going home with a bag or box of the little orange balls. We took them to the DMV when we registered cars. We took some to the nice man at the chainsaw store where Randy bought his chainsaw. We took some to the Vet when we got Marble and Cappy up to date on shots. We left some in the mailbox for the mail carrier and always got a nice thank you note. We brought some to the well service guy when we went to pick up a new pump for the well. We gave some to the lady from public health who came to get a sample of our water for testing after fixing the well (Water is bad and we had to chlorinate!-another story).  We usually had a bag waiting for Mr. Mike, our UPS driver (we love Amazon Prime).  In fact, we had a bag labeled for him one day when we had to go into town and came home to find our “fed ex” delivery right on top of the “UPS” satsumas. After that we kept better track of who was coming to deliver what and left bags for them all.

The big freeze last week ended most of that. There are still some good ones on the trees. I harvested all the ones left on my favorite because they had thinner skin and needed to be used. In fact the asst fire chief that came by to give us our new mailbox numbers (another story!) had his kids with him and we let the kids loose in the trees and they had a blast getting all they could.

I ended up making marmalade out of the ones I harvested from my favorite tree and the next spell of cold weather got the rest. To give you an idea of how many we had: we were giving them away by the 5 gallon bucket load at the end and still ended up with at least 400-500 in the burn pile.  Now to see how the trees survive and what kind of crop we get next year. The LSU AG extension agent is scheduled to come by with some neighbors to get cuttings from our trees to graft and propagate them. Never a dull moment.

Happy January to all.